Spiritually minded people have lived near Spring Bayou and the Anclote River for thousands of years. The remains of temple mounds and ancient villages can still be seen in Tarpon Springs. The cultural center at Spring Bayou has exhibits that tell part of the story.

In 1885, fourteen Universalists gathered to form a congregation in Tarpon Springs. Anson P. K. Safford donated land for the construction of a wooden church building. Governor Safford was a Universalist and a former Arizona governor who was one of the early leaders in Tarpon Springs. Dr. Mary Safford was his sister. Dr. Safford was an early feminist and a physician who lived with her brother Anson. Information about the Safford family is available at the historic Safford house at 23 Parkin Court, near the church buildings. 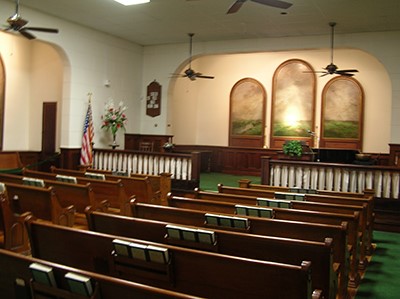 The Rev. Henry DeLafayette Webster was the first Universalist minister in Tarpon Springs. Like Mary Safford, he provided medical services to wounded soldiers during the American Civil War. He wrote the tragic song "Lorena." Instrumental versions have been heard in several movies, including "The Searchers," which starred John Wayne in a revealing role. The song is played by church musicians on appropriate occasions. 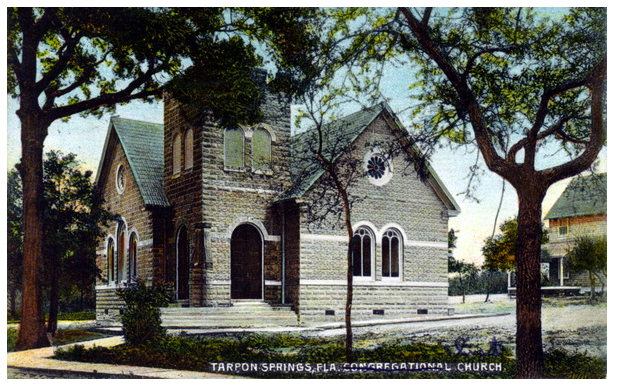 In 1887, Tarpon Springs was incorporated. It had a population of 52 residents. The community and its Universalist church attracted vacationers from the North. George Inness, a famous landscape artist, probably arrived in the Tarpon Springs area in 1890. Inness was a mystic who became involved with the Universalists. His son George Inness, Jr., was an artist who supported the church during the early 1900s.

Because of the Inness family and others, Tarpon Springs became one of the first art colonies in Florida. By the early 1900s, the town had an impressive mix of different racial and ethnic groups, and it became popular with writers, painters, and other creative people.

A fire destroyed the church's first building. In 1908, the present structure was constructed at the corner of Grand Boulevard and Read Street. Several additions have been made. On September 28, 1918, a tropical storm broke several windows in the sanctuary. The First World War was in progress and window glass was expensive and difficult to obtain. George Inness, Jr. and his family, donated several paintings to cover the damaged area. It was the beginning of the church's collection of Inness paintings. Tour busses started to arrive during the 1920s filled with visitors eager to see the church artwork. According to legend, the paintings are protected by a lady ghost who was a docent.

Our church has had some notable ministers. Rev. Harriet Baker Robinson served both the Universalist church in Tarpon Springs and the Universalist congregation in St. Petersburg. During the early 1900s, she traveled back and forth between her two churches by train. Rev. Robinson was the first of several ministers who held a joint pastorate that involved Tarpon Springs and St. Petersburg.

Ida Folsom was ordained as a Universalist minister in Tarpon Springs in 1952. Rev. Folsom was a women's rights advocate who became the first Executive Director of the Association of Universalist Women after leaving Tarpon Springs. When he arrived in Tarpon Springs in 1956, Clinton Lee Scott was already famous among the Universalists. Rev. Scott had opposed racial segregation laws during his ministry in Atlanta. During his Tarpon Springs ministry, he was active in bringing the Universalist Church of America and the American Unitarian Association together. The merger took place in 1961. Rev. Scott was an active minister until he was in his 90s. Rev. Wes Stevens, Minister Emeritus, served the congregation from 1997 to 2007. Rev. Bob Murphy, Minister Emeritus, served the congregation from 2015 until his retirement at the end of 2019.

Late in the year 2013, the church buildings were closed because of sink hole damage. The Inness paintings were sent to storage in Orlando and the congregation began to meet at different places, including the Walton Center. Construction work took almost six years. The church was officially reopened and rededicated on September 29, 2019. It was one hundred years, plus one day, from the date when the tropical storm destroyed church windows. Before the ceremony began, the city's mayor presented the church with the key to the city.

Florida's environment and population have changed dramatically during the past century, but the Unitarian Universalist Church of Tarpon Springs is still a religious organization that is concerned about the whole community. Our congregation is one of the oldest of the Unitarian Universalist congregations in Florida. We promote spiritual growth, social justice, and the arts in a delightful town on the Gulf Coast.