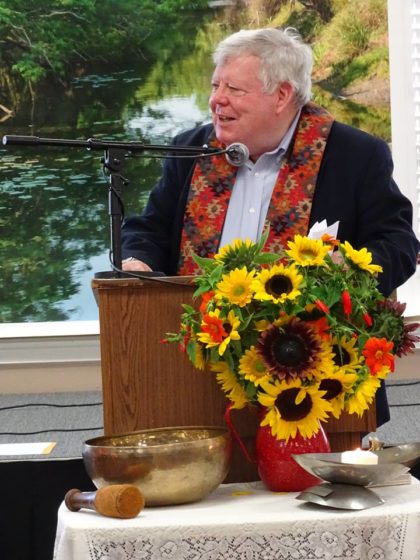 We’ve seen miracles happen. Give it some thought. As September 11th approached, the Tarpon Springs area prepared for Hurricane Irma. Church members and friends expected a Category Five hurricane with sustained winds of 157 mph. In that kind of storm, the results are “mind boggling,” according to one county official. Roofs are torn away from houses and neighborhoods look like Houston after Hurricane Harvey. It’s unlikely that our church buildings could survive in a Category Five hurricane.

Over 6.2 million Florida residents were told to evacuate. According to some reports, it was the largest mass evacuation in American history. In Pasco County and in Pinellas County, thousands of people were moved into emergency shelters. Nursing homes were evacuated and airports were closed. The highways were jammed as motorists tried to move to safe places. In the midst of the chaos, a series of miracles happened. Call it the grace of God, if you like. Maybe we were blessed by Saint Nicholas. According to some folks, much of our region is protected by sacred mounds that were established by the Native Americans. Maybe we were just lucky, for a few days. Several things happened that our church will recognize and celebrate in October.

Hurricane Irma was very weak by the time the storm reached our area. We expected a major crisis and the crisis didn’t happen. Most families lost electricity for a few days, and there was some flooding; but our problems might have been worse.

More miracles to celebrate: Unitarian Universalists were prepared for Hurricane Irma. Church members helped each other with transportation, housing, food, financial assistance, and emotional support. Our congregation was also effective in working with other congregations and with community groups. It was a wonderful moment for the Unitarian Universalist Church of Tarpon Springs. We worked as a team and we did some good. For some people, perhaps that’s the real miracle that needs to be celebrated. We discovered what’s needed and what’s possible for our congregation. Hurricane Irma may have strengthened our church.

Keep the team spirit alive. It’s needed in our church and in the larger world. On Saturday, October 14th, we’ll have a potluck picnic at Fred Howard Park to bring everybody together. Like the Canadians, we’ll celebrate Thanksgiving Day in October. Because of the Sukkot season and because we’re in Tarpon Springs, we’ll have some Mediterranean foods and games. Come join us. It’s a moment to say “thank you.” We’ve seen some miracles. We know what’s possible.